If you're reading this, it means (most likely) 24 years ago you were one of those kids of the 90's who were obsessed with those five teenagers with attitud who were recruited by Zordon and Alpha 5 to become colorful superheroes and fight monsters in huge dinosaurs robots

Now with the new reboot coming out in March you many think it's the great return of the Power Rangers, but the truth is they never left. Power Rangers is a franchise that has been on television for 24 years, adapting its superheroes with all the themes you can imagine, from animals to space travel. Although this method of success can’t be credited to themselves, but to their original Japanese version. That's right, although you probably didn’t know, Power Rangers has never been an original American series but an adaptation; The vast majority of suits, monsters and zords (robots) comes from a series in Japan called Super Sentai, which has more than 40 seasons.

Mighty Morphin Power Rangers was adapted from Kyoryu Sentai Zyuranger, the 16th season of Super Sentai. Haim Saban had the idea to produce a television series simply by buying Zyuranger's rights and changing the scenes of Japanese actors by Americans. And this idea did prove to be a multi-million dollar one, Power Rangers is no longer just a children's program, it is a trend followed by a lot of people and fans around the world, both children and adults.

But now with the film just around the corner, many wonder what to expect from this new version. Lionsgate risked buying the rights to Power Rangers, after hits like Twilight or The Hunger Games, they were looking for something equally attractive to young people.

When the movie was announced, the world flooded the network with mostly negative thoughts, saying it would be a failure and that the adaptation was unnecessary. Then, when the members of this new production were revealed, with writers of the saga X-men and Thor, a cast led by Elizabeth Banks as Rita Repulsa, Bryan Cranston as Zordon and Bill Hader as Alpha, expectations began to change. Lionsgate then revealed the Rangers outfits followed by two trailers that gave us a general look at what the movie will look like. Only the teaser trailer generated more than 150 million views in it’s first 48 hours. 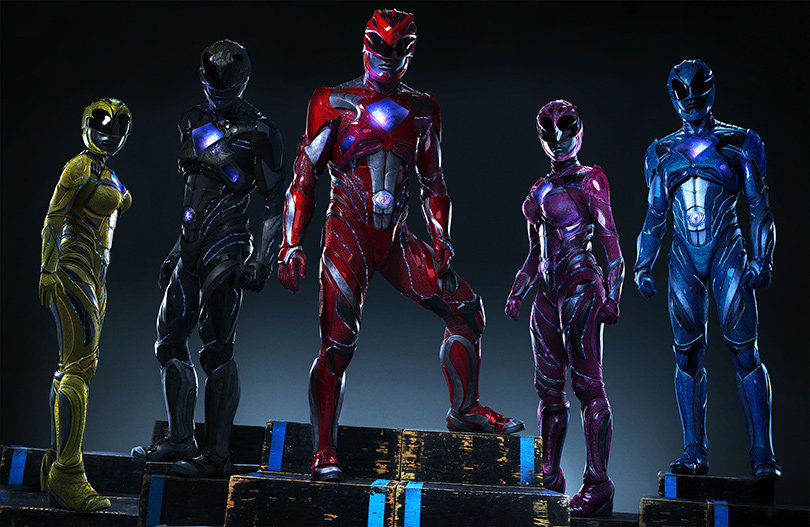 First things first, this movie is PG-13, which means it could contain material not suitable for children under 13 years. The theme will be darker, but will continue to have the mood and spark of the series, something similar to the Spiderman or The Avengers films. With a budget of $120 million, the special effects will obviously also be very different, in the best of ways.

As for the plot.

We all know that Zordon recruits Jason, Zack, Kimberly, Billy and Trini to become Power Rangers, but here will be different. The trailer shows us that it is Billy who gets the power coins and then each one gets his own. These coins give them superhuman abilities that leads them to investigate further and find out for their own free will the command center, which on this occasion is a spaceship (which I thought was a brilliant idea).

Zordon is still a floating head, but is no longer inside a tube. Now he looks more like a living computer, something resembling Superman's Fortress of Solitude. Alpha is still an annoying robot, not a big change here.

Now Rita. In the first season the Rita we saw was the same villain of Zyuranger by questions of budget. They only did a very good dubbing where the words coincided with lip movements. That's why Rita and the Rangers never had a face-to-face encounter. But in this version it will be very different. Rita will not stay in her moon palace (if she has one). She even claims that she has killed Rangers before. That leaves us with many things to think about.

The Rangers are also very different from the original ones, although they are still the same characters, the five teenagers with attitud that we remember were goody-goods with time to teach at the youth center, play sports and have excellent grades. This time they have deeper problems that will allow them to have a little more development. Each one belongs to a different group in the school, since the film took inspiration from the classic "The breakfast club".

Something we will not see for now is everyone's favorite green Ranger, Tommy. Although maybe we could expect a post-credit scene or something.

In the series, Rita had the power coin of the green Ranger, whom she later used as her own evil Ranger. The new Rita has a green suit with gold. Coincidence? I don’t think so. Even in certain photos you can see the green power coin on the witch's cane. Most likely, in this version she will decide to use the coin instead of using Tommy, which would not bother me at all.

Something even deeper is that Rita could actually be Trini's mom / step-mother. In the trailer we hear Trini's mom, but we don’t get to see her. This voice is very, very similar to that of Elizabeth Banks. Not to mention that later, Rita attacks Trini in her own room. Will Rita take over the body of Trini's mother?

The last big rumor is that Zordon and Rita were Rangers in the past. If this is true there is no doubt that Zordon would be the first Red Ranger we would see in the movie. We can only wait to discover the truth.

Power Rangers premieres on March 24 in theaters. If there is something I forgot, let’s to discuss it below, and also let me know which Ranger was your favorite as a child. Mine was and still is Billy, the blue one.

May the power protect you!

Don't miss the surprises are coming, sign in and receive the newsletter in your email.